So after Batman v Superman, the question on everyone’s minds – probably including Warner Bros. – was very likely: when is the Ben Affleck’s Batman solo film? Well, that’s a little tricky, because according to his agent, he’s only contracted to don the cowl again for the two Justice League films releasing in 2017 and 2019. That’s three times he stars as Batman in four years…which is a whole lot of Batman. Understandably, they might decide that it’s could risk over-saturating fan’s appetites.

It’d be remiss of me however if I didn’t point out that in several reviews – both from fans and from the critics (most of whom slammed the film as being dull and a failure) – that Ben Affleck’s Batman was the best received part of Batman v Superman, except perhaps for Gal Gadot’s Wonder Woman. Morever, Ben Affleck confirmed in an interview a while ago with DC All Access that he and Geoff Johns, Chief Creative Officer of DC Entertainment, were collaborating together on a project which he didn’t name at the time.

Bright days are here for Warner Bros and their fledgling franchise, because today at CinemaCon, the CEO of Warner Bros. Entertainment officially confirmed that a Batman movie starring Ben Affleck had been greenlit by the studio! Moreover, it has since been confirmed by his agent that Affleck had indeed written a script for a Batman movie. Zack Snyder, a director and architect of WB’s burgeoning franchise, has even confirmed that taking the directorial position was practically a “prerequisite” to go ahead.

Whilst an official release date remains absent, Warner Bros. has since announced 2 release dates for as yet unnamed films set in the DC Extended Universe – 5th October, 2018 and 1st November 2019. The safest bet for those films would be the Suicide Squad sequel reported to be in development, filming in 2017 which could well make the 2018 release date. The other film…Batman is the safest bet, but it could also be something like the Lobo film, if Jason Fuchs’ script gets greenlighted, or perhaps, audience reception allowing, even a Wonder Woman sequel.

With such negative critical reception for Batman v Superman (at time of writing, 29% on Rotten Tomatoes), yet concurrent praise for Affleck’s Caped Crusader, WB may well decide to fast-track their planned Batman film in order to cash in on what goodwill Affleck has required whilst it lasts. After all, since Christopher Nolan’s Dark Knight trilogy, Batman has very much become a safety net for Warner Bros. Pictures and with Affleck’s accrued goodwill, an official announcement seems more like a matter of time than a nebulous possibility.

It seems that the earliest that they could slot it in would be some time in 2018; filming on the first Justice League movie has just started, which should take up at least the next six to eight months for Affleck. After that, he doesn’t appear to have anything else on his plate aside from his latest directorial effort, Live By Night, which releases in October 2017…leaving him a not-insignificant window of time to film a solo Batman movie, if he was so inclined, even with working on post-production for Live By Night. With the report by The Wrap that a Suicide Squad sequel was being planned to film in 2017 though, it seems more likely that the 2018 film would be Suicide Squad 2, and the 2019 film would be the Batman film (rumoured to be called The Batman).

With Affleck’s filmmaking talents – winning an Oscar for both screenwriting and Best Picture (in which he starred and directed) – and track record (94%, 94% and 96% on Rotten Tomatoes for his three currently released directorial efforts), Warner Bros. honestly has a good chance of a box office coup with this announcement, one that it frankly rather needs.

After all, whilst still a major powerhouse in the box office, Warner Bros’ share of the film market has declined since its flagship Harry Potter franchise ended in 2012 with Deathly Hallows – Part Two. As a side note though, the franchise is having new life breathed into it this year with the first instalment of a prequel trilogy, which aims to recapture the magic that so captivated audiences in the 2000s (not to mention at least some of the nostalgia factor that propelled Star Wars: The Force Awakens to its fantastic 2+ billion worldwide box office gross), Fantastic Beasts and Where to Find Them, marking J.K. Rowling’s screenwriting debut in the process. It’ll also be interesting to see how it fares against Marvel’s Doctor Strange film, which also has magic being a primary focus.

Still, the DC Extended Universe is undoubtedly going to be the studio’s new flagship enterprise, with its iconic characters such as Batman, Superman and Wonder Woman, in comparison to the complete unknowns in Fantastic Beasts and Where to Find Them. Not to mention the fact that it has at least nine more films to roll out from now until 2020 whereas Fantastic Beasts is only a trilogy. Suffice to say, WB is very much hoping for the DCEU and this new trilogy in the Harry Potter universe to fill up their coffers, and as far as getting a proven director goes – well, with his track record, Affleck definitely deserves to be given the keys to the Batmobile.

Moreover, with such a rich and talented assembly of potential cast already – Affleck himself and Jeremy Irons’ Alfred Pennyworth are certainties, of course, but we could also have JK Simmons, Jared Leto and Margot Robbie, who have been cast as Commissioner James Gordon, Joker and Harley Quinn, respectively – it would be truly criminal to not make use of them sooner rather than later. Four of the five have 5 Oscars between them (three for acting), and the one without is still rather talented. Not to mention Deadshot (played by Will Smith, an Oscar nominee) could also make an appearance, being that his character has often crossed paths with Batman.

That’s an impressive potential roster to headline an adaptation, one that could elevate the Batman franchise to heights it hasn’t ever seen before – and with a far more comic accurate Batman than we’ve seen in days past, things are sure to be exciting in Gotham over the next few years!

Moving on – here’s a few things we want to see from the Batman solo feature.

Bruce Wayne says this to Diana Prince as he tries to reclaim a ‘borrowed’ flash drive, remarking on how she wants him to underestimate her by drawing his attention to her beauty. Given that this Bruce Wayne is reaching the end of his career by the time we first meet him in Batman v Superman, it’s a sure bet to say that he’s seen some very unusual women. We know, of course, from her existence in the highly anticipated Suicide Squad film that Harley Quinn has already existed in this reality, but there’s a few others that could fit the bill.

“Twenty years in Gotham, how many good guys are left?”

Harvey Dent (Two-Face) and Jason Todd (first Robin, then Red Hood after being killed and resurrected, becoming a merciless killer for justice) both fit the curve, but it was pretty strongly implied that Batman believed the Robin whose suit hung in his cave to be dead, so if the Robin is Jason Todd, he probably hasn’t been resurrected yet.

Harvey Dent, on the other hand, has been immortalised in Christopher Nolan’s The Dark Knight in comic book movie history, his fall from being Gotham’s so-called white knight akin to a Shakespearean tragedy. A veteran Batman would have definitely found an ally or two here and there, and since Commissioner Gordon’s dedication to justice is pretty much sacrosanct, then Harvey Dent is likely to be one of these fallen ‘good guys’ Bruce was referring to.

But speaking of the Red Hood…

Under the Red Hood storyline

As aforementioned, the second Robin, Jason Todd, was killed. What I didn’t mention was that he was killed by the Joker, beaten to death with a crowbar. Batman hung up his suit in the Batcave as a reminder of his greatest failure. 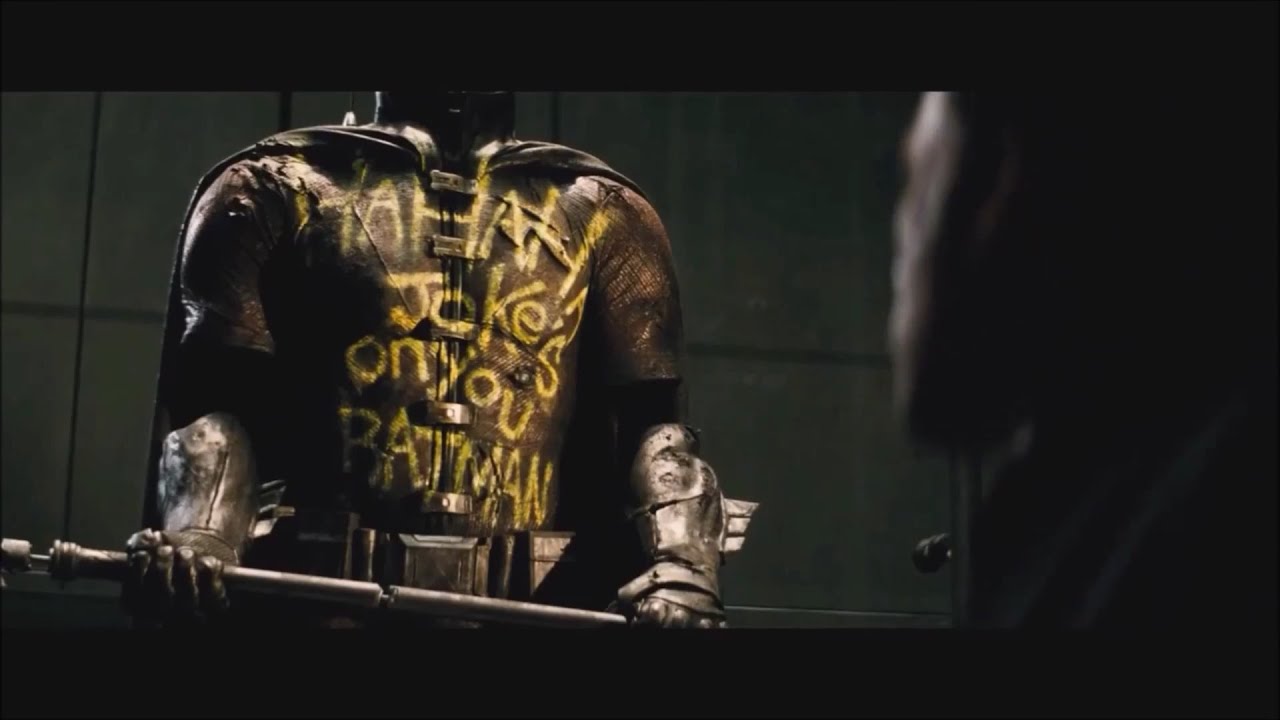 Soon after though, he was resurrected, and unfortunately bringing someone back to life is not as straightforward as putting them six feet under. How strange.

At any rate, the process left him slightly unhinged, and when he leaned that Batman had never avenged his death by killing the Joker, he took it upon himself to exterminate the criminal element by doing what Batman never could. Killing them all. Already captured in an animated film (Batman: Under the Red Hood), taking some inspiration from that storyline would provide a perfect parallel to the grizzled Batman, who has only just begun stepping back from that thin line following Batman v Superman. Of course, to do the source material justice, we’ll need some more people…

A part of the Bat-mythos that has been severely under-utilised save for in animation, it’s high time that the rest of the Bat-family apart from Alfred and Batman himself enter the stage. We already know that Bruce has had at least one Robin, who ended up dying, his suit kept as a reminder to Wayne in his Batcave. Whilst the Robin was never named, the striking similarities simply scream Jason Todd.

But Batman didn’t only have one Robin – he had, off the top of my head, at least four, and possibly five: Dick Grayson, Jason Todd, Tim Drake, Damian Wayne, and possibly Stephanie Brown (who definitely ended up taking the name of Batgirl/Spoiler, maybe both of them).

Furthermore, Jena Malone has apparently been cast as Barbara Gordon, who would become the first Batgirl in the comics, and, following a crippling injury by the Joker (sensing a pattern here) became Batman’s chief technical support officer. This iteration of the Batman has proven to be far more comic-accurate than any other, with gadgets and a fighting style that seems ripped straight out of the acclaimed Batman: Arkham game series, so going the extra leap and throwing in the Bat-family as well would be a welcome way to not only distinguish this incarnation from Christian Bale’s in the Dark Knight trilogy, but also a good way to continue that streak of comic book fidelity.

Suffice to say, there’s a lot of choice Affleck and Johns have when it comes to who in the Bat-family they might like to introduce. As for who I would personally pick to appear? Well, I already said I wanted Jason Todd, but I’d also really like to see Damian Wayne take the stage. Adding a father-son dynamic would be interesting to see, especially with Damian’s…proclivities, being a trained killer. And with Batman seemingly trying to move away from his violent tendencies, him suddenly being introduced to the killer son he never knew would be a veritable goldmine to exploit. Not to mention the fact that Jason was (understandably) infuriated that Batman had replaced him with a new Robin (Tim Drake) not long after his death…

So what do you want to see be put on the big screen for Ben Affleck’s Batman film? As always, please share if you liked this :). And rest assured that we won’t have to wait a year to see Batman again – he’s appearing in Suicide Squad, coming 5th of August!